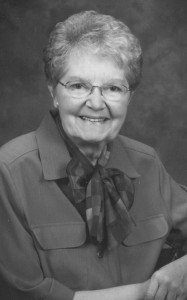 Agnes peacefully entered eternal rest on March 31, 2016 after suffering a massive brain hemorrhage. The youngest of eight siblings, Agnes (Doerksen) Nikkel was born December 28, 1932 in Gem, AB to John and Katharina Doerksen. Agnes graduated from Chilliwack High School (BC), attended three years of Bible School (class valedictorian), continued with three years of college in Winnipeg, completed her degree at UBC and chose education as her profession for 33 years. Church activities, music, family, and travels were large components of her life.

In 1990 Agnes became part of the Nikkel family which, by loving and marrying Henry P. Nikkel, entailed moving to Lethbridge and joining a family complete with adult children, grandchildren, and (later) great grandchildren. Henry and Agnes faithfully served the Lord through multiple church ministries during their marriage and took every opportunity to get together with family. Enjoying her gramma status, Agnes crocheted beautiful afghans for everyone. There was a void left in Agnes’ life when she was widowed 10 years ago after only 15 years of marriage, but she had the continued support of family and friends. We are comforted in the knowledge that Agnes is celebrating this day in glory with family and friends who have gone on before her.

Friends and family are invited to pay their respects between 7:00PM and 8:00PM on Tuesday, April 5, 2016 at MARTIN BROTHERS RIVERVIEW CHAPEL, 610-4 Street S., Lethbridge, AB.

Interment will be held at 10:00AM on Wednesday, April 6, 2016, at MOUNTAIN VIEW CEMETERY followed by a Celebration of Life Service at EVANGELICAL FREE CHURCH, 4717 24 Ave S, Lethbridge, AB.