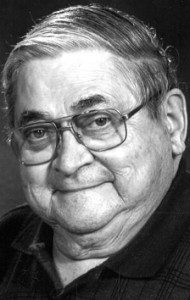 Victor Richard Brett of Coaldale, beloved husband of Ida Brett (nee Bellamy), passed away in Lethbridge on Wednesday, March 30, 2016 at the age of 77 years.

Besides his loving wife Ida of 56 years, Victor is survived by their three children Deborah (John) Dee of Florida and their family Heather (Jamil) Lucy and Jonathan Lau; Brian (Ruby) Brett of Calgary and their children Steven and Jenna; Kevin (Diane) Brett of Coaldale and their children Caitlyn, Blake (Sarah) and Darby; two great grandchildren Alexander and Korra Lucy as well as numerous nieces, nephews and their families. He is also survived by two siblings and their families, Margaret Moore and Gerald (Marilyn) Brett. Victor was predeceased by three older brothers, Jack, Ronald and Keith Brett.

Victor was born in Alliston, Ontario on May 24, 1938 to Olive and Nelson Brett. He grew up working on the family farm and as a young man worked as a feed mill operator before training as a mechanic in the early 1970’s. Victor moved his family to Coaldale in 1977 and worked in Lethbridge as a heavy-duty mechanic until retirement in 2003. Victor’s life centered on family, friends and his church. He was always ready to help at church functions and enjoyed square dancing, camping, trips to Ontario and United States to visit family and friends. He also enjoyed quiet evenings at home playing a game of cards with close friends.

One Condolence for “BRETT Richard”