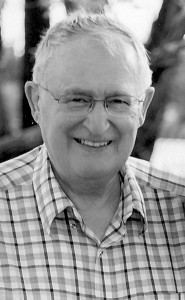 DON SELK of Lethbridge, Alberta passed away peacefully Saturday, April 2, 2016 at the age of 75. He was the beloved husband of Louise Selk. Don was born to Virgil and Marjorie Selk November 15, 1940 in Lethbridge at St. Michael’s Hospital. He grew up in Stirling and Rosemary on the family farm. As the oldest brother of 10 children he had many fond memories and funny stories of growing up on a farm. In high school he earned the Governor General’s Award for academics and then moved to Edmonton to pursue a career in dentistry, at the University of Alberta. He met Louise at University and they married and settled in Lethbridge, where he opened his dental practice. He served his dental patients with dedication for 43 years, and served on the Board of the Alberta Dental Association. He was a devout member of The Church of Jesus Christ of Latter-day Saints. He served as a bishop and in several stake presidencies for over 25 years with the church. Don served a mission in his later years in the Toronto East mission. He has affected so many lives with his service in the church, and he had a strong testimony of the Lord throughout his entire life. Don will be forever loved and remembered by his wife Louise of 51 years. He is survived by his six children: Shauna (Tyler) Hayward of Lethbridge, Laura (Tracy) Lykins of Elizabethtown, Indiana, Michael (Tracy) Selk of Stirling, Barrie Selk of Lethbridge, Pat (Jessie) Selk of Lethbridge and Devynn (Brian) Bohn of Stirling. He is also survived by 22 grandchildren whom he loved dearly; he was the best Grandpa in the world! Preceding him in death is one son Christopher Lyle Selk, one grandson Truman Virgil Bohn and his mother Marjorie Selk and father Virgil Selk. Friends may meet the family on Wednesday, April 6 from 7:00 to 8:00 p.m. at CHRISTENSEN SALMON GENERATIONS FUNERAL HOME, 703-13 Street North, Lethbridge, or prior to the funeral service on Thursday at the church from 10:00 to 10:45 a.m. The Funeral Service will be held on Thursday, April 7, 2016 at 11:00 a.m. at The Church of Jesus Christ of Latter-day Saints, LETHBRIDGE STAKE CENTRE, 2410-28 Street South, Lethbridge.Interment to follow in the Stirling Cemetery.

Leave a Condolence for Louise Maurik