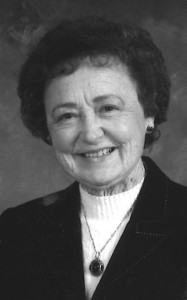 It is with heavy hearts that we announce the passing of our mother, Doreen, beloved wife of the late Stephen Tokariuk, in the early morning of Monday, April 4, 2016.

Doreen was born on April 28, 1931 in Coaldale, AB. She moved to Lethbridge to work as an Administrative Assistant at the Haig Clinic. She married Steve Tokariuk on July 9, 1955 and moved out to the family farm in the Sunnyside area where she resided until moving to Columbia House in 2015.

Grandma’s home was special for many family gatherings, the most special being Thanksgiving. Doreen enjoyed cooking, gardening, bowling, and traveling. Doreen was the Lethbridge Hurricanes’ # 1 fan.

Thank you to the Staff at Columbia House and Regional Hospital for their care and attention given to Doreen during her time there.

A Funeral Service will be held at 11:30AM on at ST. MARTHA’S CATHOLIC CHURCH, 355 Columbia Blvd. W., Lethbridge, AB, with Father Rogue Pereira, officiating.

One Condolence for “TOKARIUK Doreen”