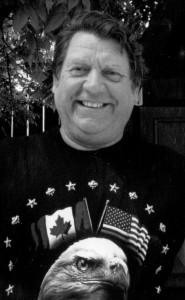 CHARLES “CHUCK” PARKER, beloved husband of Jacquie Parker of Lethbridge, passed away in Lethbridge on Saturday, April 2nd, 2016 at the age of 72 years after a courageous battle for life.

Chuck, or “Chaz” as he was known to his friends, is survived by his wife of almost 45 years, Jacquie, his daughter Billie Jo (Larry) Basque of Lethbridge, step-son Dan Arbour of Calgary and sister Audrey Jeffrey of Porcupine Plain, SK. He also leaves his special granddaughter, Jordyn, whom he loved and thought the world of, as well as numerous nieces and nephews, relatives, and friends near and far. Chuck is already missed by his special “poops” Emily, who never left his side. Chuck was predeceased by his father, William, in July of 1972, step-father, Jack, in 1995, and more recently his mother, Hilda in March of 2014.

Chuck was born on June 5, 1943 in Morse, Saskatchewan. He moved with his family to Lethbridge at the age of five. Later on, he ventured to Calgary where he enrolled at SAIT and received his journeyman Sheet Metal and Auto Body Tickets. He met Jacquie in Calgary in 1965. They later moved back to Lethbridge and were married April 13, 1971 and Billie Jo was born in January of 1972.

Chuck worked with Alcon Refrigeration and Heating as a Sheet Metal journeyman for many years of his life, but he was most passionate about auto body work which led to his very own business, Honest Charlies Paint and Repair. After that wound down, he worked with numerous auto body repair shops, until his ultimate retirement at the age of 61. He had another and perhaps ultimate passion for his Harley Davidson motorcycles. He loved his Harleys and took great pride in his creations from start to finish. He is riding free now.

Those who knew Chuck knew he was talented in anything he did. He had an incredible eye for detail and a stubborn attitude that if you weren’t going to do it right, you shouldn’t do it at all. He had an answer for everything, no matter what the task. His interest and skills were endless, including music and playing instruments, dancing, and the outdoors, especially sitting around the campfire sharing stories. He loved spending time with his family and friends and the memories he leaves behind are endless and will be cherished by many always.

An Informal Celebration of Chuck’s Life will be held at the ROYAL CANADIAN LEGION, 324 Mayor Magrath Drive South, Lethbridge, AB, on Saturday, April 16, 2016 from 1:00 – 4:00P.M. Flowers are gratefully declined.