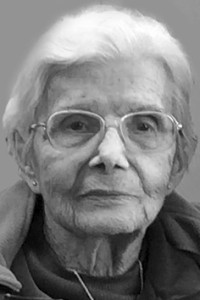 May Coulter of Calgary and formerly of Lethbridge, AB, passed away on Tuesday, April 5, 2016, at the age of 97 years.

May was raised on a farm with her two brothers, Albert and Walter. She trained as a nurse in Regina, SK, and was stationed overseas during the Second World War in England then in Belgium.

After the war, May lived in Victoria and continued her nursing career in Obstetrics. She married Norman Coulter, and settled in Vancouver to raise a family. Lethbridge became her home in 1965. Her final years were spent at the Colonel Belcher Veterans Home, in Calgary, AB.

May will be fondly remembered for her playful nature and quick wit. She enjoyed the simple pleasures in life, needlework, reading and playing solitaire. She loved children and took great delight in spending time with her grandchildren and great grandchildren.

What the family will remember most was her ability to take life’s ups and downs in stride. In difficult times “this too shall pass” were words she lived by.

As her wish, a private family service will be held in celebration of her long and remarkable life. Condolences may be sent through www.hffs.com.

If friends so desire, a memorial tribute may be made to the charity May supported, Leprosy Relief Canada, 305-1805 SAUVE STREET W., Bureau 305, Montreal, QC H4N 3H4 https://www.canadahelps.org/en/ charities/leprosy-relief-canada/ or to any charity of your choice.

The family wishes to express a very special thank you to the nurses, staff and caregivers of the Colonel Belcher and to Rita Iannaccone for the compassionate care and love she gave to our mother.