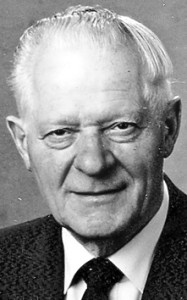 The family of Eugene Fabro is saddened to announce that their father passed away in the Crowsnest Pass Health Centre on April 9, 2016 of natural causes. Dad was 96 years old.

Eugene was born in Colloredo, Udine, Italy on June 5, 1919 the only son of Teresa and Ferdinando Fabro. He immigrated to Canada in 1926 and served in the Canadian Armed Forces during WWII with the Kings Own Rifles and when he was honorably discharged, he sought work as an electrician at the McGillivray Coal & Coke Company. Shortly after, he married his life-long love, Mary DeCecco.

Dad worked his way up in the mine to eventually becoming the Executive Vice-President of Coleman Collieries. In the early 70’s and with his partners, Dad became one of the owners of Byron Creek Collieries. Together, they built the company to the point where it was eventually purchased by Esso Resources. Dad was known as one of the foremost mining authorities in Canada and negotiated coal supply contracts world-wide. He was instrumental in developing the unit train concept with CPR and as a result and due to the long-standing relationship that he had with CPR, the railway siding to Byron Creek Collieries mine site was named after him.

Dad was a family man and as such, a fierce defender of his wife and his family. He was an ethical and moral man who was thoughtful and respectful of others. Above all else, Dad was a fair and gentle man as he always gave a second chance in life and in business to everyone that he involved himself with. He tried to project a strong gruff attitude but in reality he was a soft hearted and mild mannered man – a courtly gentleman.

Dad always enjoyed his time at Flathead Lake with our Mom; it was an inspirational and loving place to be as a family and we created many memories. Dad loved to travel and he and mom toured with the Opimian Society to taste wines all over the world including North and South America, Africa, Australia and Europe. They also toured on their own and visiting Japan, China and Europe several times. They even managed to go behind the Iron Curtain during the Cold War!

Dad lived a long full life. His caring ways thoughtful advice, business acumen and genuinely loving attitude to his family and friends will be dearly missed.

Thank you to Dr. Annand and all the professional, caring nursing staff at the CNP Health Centre for taking care of our father and making his final days as comfortable as possible. Thanks also to Fantin’s Funeral Chapel for the arrangements for Dad’s final journey.

In lieu of flowers donations may be made in dad’s name to the Crowsnest Pass Health Foundation (Bag 1, Blairmore, AB T0K 0E0). Condolences may be registered at www.fantinsfuneralchapel.ca.