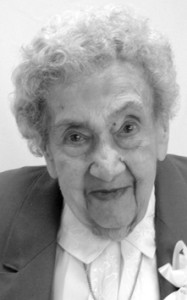 Shayler: Sister Marie Albert, 102, a Sister of St. Martha of Antigonish, died at Bethany, the Motherhouse, on Saturday, April 9, 2016. She was in the 79th year of her religious life.

Born in Brandon, Manitoba, Sister Marie Albert, baptized Mary Louise Nora, was the oldest in a family of four children, the daughter of the late Harry Avery Shayler and Mabel Louise (Parry) Shayler. Sister Albert was predeceased by her three siblings: Eunice Brown, Joan Fraser and Stanley Shayler. She is survived by several nieces and nephews who are regularly in contact with Sister Marie Albert.

Sister entered the Congregation of the Sisters of St. Martha on February 8, 1936 and pronounced her first vows on September 3, 1937, and her perpetual profession of vows on September 3, 1940. Before she entered the congregation, Sister received her R.N. from St. Joseph’s Hospital School of Nursing, Lewistown, Montana. She worked in Alberta at Pincher Creek Hospital in Pincher Creek, and at St. Michael’s Hospital in Lethbridge. In 1940 she graduated from St. Francis Xavier University in Antigonish with her B. Sc. in Nursing. In 1963 she received her certification in Hospital Organization and Management (HOM) in Winnipeg, MN.

Sister’s remains will be resting at Bethany, beginning the afternoon of Tuesday, April 12, at 1:15, where a Celebration of Vigil will be held on the same evening at 7:30. Liturgy of Christian Burial will take place on Wednesday, April 13, at 2:00 p.m. in Bethany Chapel.

Arrangements are under the direction of MacIsaac Funeral Home of Antigonish. www.MacIsaacs.ca