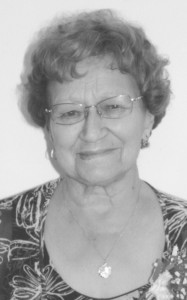 It is with great sadness that the family of Lorraine Angela Kirchner, beloved wife of Marvin Kirchner, announce her passing, at the Coaldale Continuing Care Centre on April 8, 2016, surrounded by her family. Lorraine was born October 13, 1923 in Blairmore, Alberta to Marie Louise and Theophile Pirlot. She had one older sister Renee. Mom’s first language was French, and she did not learn English until she had started school. In 1935 Lorraine and her Mother traveled to Belgium to visit relatives and were not able to return until after WWII. She completed her schooling in Belgium.

She was working in Lethbridge when she met Marvin at a dance at the old Trianon Dancehall. They were married September 19, 1953. They had two children, Dwayne (Kris) and Laura-Marie Doenz (Bruce), six grandchildren, Kimberley (Les), Dessa (Rob), Elaine (Jordan), Adam (Becky), Blake and Janay (Jared). Ten great grandchildren, Shaye, Brennan, Teya, Graden, Carter, Finn, Maleeya, Keelin, Locklyn and Tate. Lorraine was predeceased by her parents, sister and son-in-law Bruce and many relatives.

Lorraine was a devoted wife, mother and homemaker. She loved gardening and preserving the bounty of the garden. She enjoyed camping, fishing, traveling, bowling, playing cards, golfing, and especially being with family. She was a caregiver all of her life beginning with her children but including her mother, her sister, father-in-law and many other people. Lorraine and Marvin had many pets but none were as special as their black poodle, Tiffany.

She will be sorely missed. The family would like to thank the wonderful staff at the Coaldale Continuing Care Centre for the kindness and excellent care they gave Lorraine.