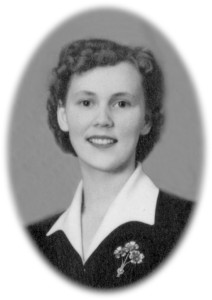 Alice was born in Monitor, Alberta. As very young girls, she and her sisters (Florence, Marie and Ruth) became accomplished musicians and eventually formed the Anderson Sisters Orchestra, under the watchful eye of their parents Martin and Ida. The family moved to Lethbridge and the Orchestra quickly became a popular draw for dances in Alberta and neighboring provinces. They played to packed houses throughout their career. In addition to a full year-round touring schedule, they had a weekly radio show on CJOC (broadcast live “from high atop the Marquis Hotel”) and performed during the summer months at dance pavilions across the province. Their five-year engagement at Waterton Lakes National Park Pavilion made them the longest running attraction at that popular venue. During the 1940s they also entertained at WWII training bases and appeared with dignitaries at events to rally support for the war efforts, including the sale of war bonds.

Alice and George were married in 1948 and resided in Champion, where they continued to farm even after their semi-retirement and relocation to Lethbridge in the 1980s. Alice will be greatly missed and lovingly remembered for her kindness and thoughtfulness. She was a devoted wife and mother, and a caring friend and teacher. She coached her children along their own music journeys and generously shared her gift of music in the community. Alice also taught piano lessons to over 200 students from around southern Alberta, many of whom travelled great distances to have her as their teacher.

A private service was held to celebrate Alice’s life. Her family extends sincere appreciation to Dr. Mona Cassis and the health care professionals at Cedar Creek Assisted Living for their care and support. Donations may be made in Alice’s memory, directly to the Champion Cemetery Maintenance Association, Box 2, Champion, AB. T0L 0R0.

One Condolence for “HUMMEL Alice”