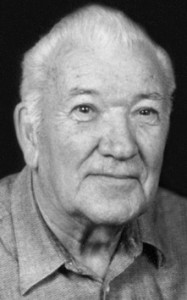 We are saddened to announce the passing of ALLAN NEVILLE, on Sunday, April 10, 2016 at the age of 86 years.

He is survived by his daughter Gayle (Joel) Morrissette and his sons, Scot (Marcie) and Lee (Rochelle); grandchildren: Loni, Lacy, Simon (Brianne), Emily, Sam, Chloe and Sophie as well as his great-grandson, Hunter Joel Lyons.

Allan was predeceased by his son Gene and his brothers, Keith and Eric.

Allan was born in High River, AB, on November 1, 1929. The early years were spent in the Turner Valley oil fields and surrounding areas. To make ends meet, the family formed a dance band called the Swing Shift and Allan became an accomplished trumpet player. He loved Jazz music and the Dixie band era. After a number of moves, the family settled in Coaldale where Allan was married to Kay Holtman for a time. They had two children, Gene and Gayle. After a number of years, Allan joined his parents in Hays, AB. where they starting farming.

Allan and Sherri were married in 1969 and moved to an acreage near Lethbridge where they raised their two sons, Scot and Lee. He worked for Western Canadian Seed and later, Palliser Distillers. He became a proud member of the UFCW and it was there that he met Norm Leclaire, a man he admired and trusted. Dad often said he wished he had become a union activist when he was much younger. We’re sure that management did not share that thought.

Allan had a passion for classic cars – especially Ford Mustangs and ‘56 T-Birds and loved working on old cars with his buddies from the Lethbridge Street Rod Association. He had compassion for animals and appreciated the companionship of any stray cats that happened to wander into his yard. Allan also enjoyed working on various projects and collecting memorabilia.

During his days at Palliser, he became close friends with Randy Gray. Dad and Randy remained the closest of friends and shared in many escapades that are best left unchronicled!