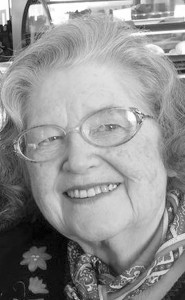 With sad hearts we announce the passing of EDITH FRANCIS, beloved mother, grandmother, and great- grandmother, on April 13, 2016 at Calgary, Alberta.

Edith, the daughter of Calvin and Irene Fletcher, was born Oct. 15, 1927 in Logan, Utah; the ninth child of Calvin and the first child of Irene. She grew up loving music and studied violin for most of her life. Edith attended Utah State Agricultural College (now USU) studying music and art, where she met Ronald Lee Francis, of Taber, Alberta, who was studying Civil Engineering. They were married in the Logan temple Oct. 5, 1948, following which they settled in Lethbridge, Alberta, where they raised 10 children. Edith was active in LDS Church activities and for many years played her violin in the Lethbridge Symphony Orchestra and Southern Alberta Chamber Orchestra. She loved to travel and took numerous trips with her family, including a sojourn in Colombia, South America, where Ron worked on an irrigation feasibility study for a year, and later accompanied him for 3 months in Jamaica. When Ron retired they moved to Raymond until his passing in 1994, whereupon she returned to Lethbridge, then later to Calgary, where she has resided for the past 14 years.

The Funeral Service will be held on Saturday, April 23, 2016 at 11:00 a.m. at The Church of Jesus Christ of Latter-day Saints, MOUNTAIN HEIGHTS CHAPEL, 175 Rocky Mountain Blvd. West. Lethbridge.