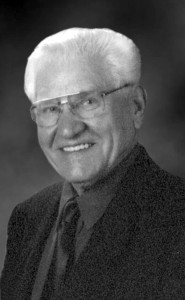 Andy was born at home on the family farm at Keho Lake, February 17, 1918. He attended school at Keho School and his school mates remained his friends his entire life. At age 17, he left home to work for C.S.Noble. He was one of the welders that built the first Noble cultivator on the Noble Farm. When the first factory was built, he became shop foreman and later shop superintendent. He retired after 44 years with Nobles, and kept farming at his farm west of Champion until 1998. Andy married the love of his life, Ada Smith, in 1941. They celebrated their 74th anniversary in August. Besides Ada, Andy is survived by his sister, Dorothy of Claresholm; Dr. Jack (Wendy); Betty; Karen (Dave); 9 grandchildren; 9 great grand-children and many nieces and nephews. Andy was very involved in the community of Nobleford. He and Ada were on the committee that published the area history book, Sons of Wind and Soil, was a founding member of the Nobleford Area Museum Society, and the Nobleford Seniors Centre. He and his friend Harold Urvold assembled and refurbished all the Noble machines for the Noble Blade Park, and designed and built the Keho School cairn, on the site. The couple moved to Lethbridge in 2004, 63 years after staring out in Nobleford. Most recently they resided at Columbia Assisted Living, where they received loving, personal care. A Celebration of Life Service will be held at 2:00PM on Friday, April 22, 2016 at SOUTHMINSTER UNITED CHURCH, 1011 4 Ave S, Lethbridge, AB, with Reverend James Grunden, officiating. Flowers are gratefully declined. Those who wish, memorial donations may be made to Nobleford Area Museum Society, Box 505, Nobleford,AB.