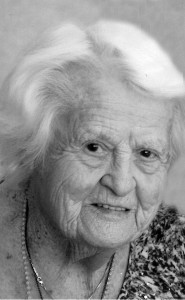 Mrs. Iris Irene Aspeslet of Lethbridge, beloved wife of the late Anton ‘Tony’ Aspeslet, passed away peacefully on Monday, April 11, 2016. Born in Kenley Surrey, England July 3, 1923, she was the third of four children. Iris helped raise her younger brother Edward and discovered a love for gardening when her father entrusted with her own plot as a teen. She met her husband Tony in 1942 and they were married a year later on July 24, 1943. They later had a son, Douglas, on April 24, 1944. Iris served in the Land Army throughout the Second World War and upon the war’s conclusion, she emigrated to Canada to join her husband in July 1946, settling in Round Hill, Alta. They moved to Lethbridge in 1955 where they remained to raise their family. Iris served on the Sanctuary Guild at St. Augustine’s Anglican Church for over 40 years. She continued to garden and took great pleasure in bringing colour to the neighbourhood through her beautiful flowerbeds. She was also an accomplished seamstress and knitter, often taking the time to make clothes for donation to the Lethbridge Food Bank. Iris was predeceased by her beloved husband Tony, and sisters Connie and Peggy. She is survived by her son Douglas (Linda); grandchildren Launa, Tara, Nicole (Bill Aylward) Simms and Dionne (Trevor) Kenney; and eight great grandchildren; brother Edward; and numerous other extended family members. A Memorial Service will be held at 11:00am on Monday, April 25, 2016 at ST. AUGUSTINE’S ANGLICAN CHURCH, 411 – 11th Street South, Lethbridge, Canon James Robinson officiating. In lieu of flowers, those who wish, memorial donations may be made to a charity of your choice.