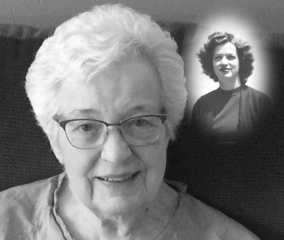 She is survived by her children Gordon (Myra Bielby) of Edmonton and Jane (George Konrad) of Lethbridge, step-grandchildren Sandra and Jennifer Woo, and many nieces and nephews.

Isabel was born in Medicine Hat on May 29, 1923 and was raised in Travers, Alberta, where she lived with her family above the Travers General Store. An Alberta pioneer, she grew up in the days before indoor plumbing and electrification. Upon graduation, she attended Garbutt Business College in Lethbridge and began a career as a bank teller in Claresholm in 1941, transferring to Champion and later to Lethbridge, where she met her future husband. Fred and Isabel were married in 1953. On Gordon’s arrival, Isabel left her career to work at home, and Jane arrived soon after. Isabel was an intelligent woman who loved sports and her little dog, Zoe, and took great pride in her home, in which she lived for almost 63 years until eight weeks before her death. A private woman, she enjoyed the companionship of many close and dear friends and family. She was a keen follower of community and political affairs and closely watched the news, always able to discuss the politics of the day. While she was good at accepting things she could not change, she was very open-minded, loved to laugh, had a great sense of humour and could gently identify the flaws in another person’s argument. She embraced her iPad, allowing her to communicate with friends and family beyond her usual letters, with emoticons and her own LOL abbreviations.

The family wishes to thank the doctors and healthcare providers at St. Michael’s for their care and support of Isabel and our family.

At Isabel’s request, a graveside service will be held at MOUNTAIN VIEW CEMETERY, Lethbridge AB at 1:00PM on Thursday, April 28, 2016.

One Condolence for “THOMAS Isabel”