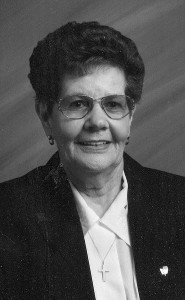 Lillian Mae Dangerfield (McLachlan) of Coutts, Alberta passed away peacefully on April 22, 2016 at Milk River Extended Care at the age of 90. Lillian was born at the John Thompson homestead on May 9, 1925. She attended school at Clarinda until its closing, then completed her schooling at Coutts. She married Frederick James Dangerfield on September 22, 1943. They were married for 48 years before Fred’s passing. Lillian was a woman of many talents and courage. As a homemaker she was very involved in the raising of their five children and assisted Fred with farming. She was an active community member with the Grain School, the Grain Community Club and Ag Society, the Women’s Institute and helped establish a Sunday school at Grain. She held many positions over the years with the Women’s Institute (WI) and she especially enjoyed her work as District Director as she met many wonderful women from across Alberta. She was a committee member for The Hills of Home History book published in 2003. A highlight for Lillian was receiving the Alberta plaque for 100 years of farming on the Dangerfield family homestead in 2010. The farm was a busy place with numerous nieces, nephews, and grandchildren spending happy times adventuring, exploring and helping on the farm. Lillian enjoyed hosting family and community gatherings and her door was always open and the coffee was always on. With her family she instilled her principles of love, giving, and acceptance and there are many precious memories from spending time with Aunty Lillian/Grandma. She loved her years at the foothills of the Sweetgrass Hills, but finally moved from the farm in Knappen (east of Coutts) at the age of 80 and resided in Coutts until she moved into the Prairie Rose Lodge at age 85 and then Milk River Extended Care. Lillian is survived by her sisters Betty Ostby and Mavis Botter, brother Ian McLachlan, sister-in-law Irene McLachlan, Jo McLachlan, and Sheila McLachlan. Her children: Sharon (Mike) Lerum of Sweetgrass, Keith (Carolyn) Dangerfield of Coutts, Bruce (Kathy) Dangerfield of Lethbridge, Valerie (David) Johnstone of Qualicum Beach BC, Kathy (Elwin) Worobec of Edmonton. Her grandchildren: Shannon (Kirk) Lubick, Justin Lerum, Stephanie (Paul) Townsend, Lara (Matt) Dunn, Chris Dangerfield, David Dangerfield, Erin (Jeremy) Larose, Suzanne (Al) Maudie, Jill (Chris) Mellor, Lyndsey (Chris) Jackson, Sonja (Stephen) Iwasawa, Andrea (Sean) Murphy, Matt Worobec, Scott Worobec and her great-grandchildren Evan, Elia, Jonathan, Nicolas, Elise, Lorelai, Isaac, Austin, Chase, Shaylee, Angelica, Carys, Asher, Kate, Roman, Chase, Molly, Presley, Abigail, Evelyn, Charlotte, Caitlin, and Oliver. She is preceded in death by her parents Andrew and Hazel McLachlan, her husband Fred, her sisters Janet Lippa and Pat Chartrand, her brothers Archie, Jim, Hugh, and Andrew McLachlan and her grandson Jeff Dangerfield, granddaughter Melanie Dangerfield and great-grandson Benjamin Dangerfield. The family would like to thank all of the staff at the Prairie Rose Lodge and Milk River Extended Care for their support in the last years of her life. In lieu of flowers, donations may be made to the Milk River Long Term Centre. Family and friends are invited to pay their respects between 6:00PM and 8:00PM on Friday, April 29, 2016. A Graveside Service will be held at 10:30AM on Saturday, April 30, 2016 at the Aden Cemetery, Aden AB. A Celebration of Life will be held at 1:30PM on Saturday, April 30, 2016 at the Coutts Community Centre, 105 Center Avenue Coutts, AB