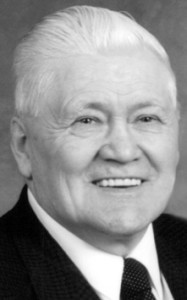 CHARLES (CHARLIE) H. WELLS, husband of the late Dorothy Wells, passed away at the Chinook Regional Hospital, on Friday, April 15, 2016 at the age of 83 years.

Charles was born on August 21, 1932 in Consort, Alberta. Charles also lived in Priddis, Alberta; Maybutt, Alberta; Raymond, Alberta and Lethbridge, Alberta. Charles went to work with his father in the farm machinery business and achieved Journeyman Partsman in 1969. Charles later went on to work for the Rogers Sugar Company in Raymond and later in Taber until his retirement.

Charles was an avid fan of the sport of baseball and had some early success playing the game. His enthusiasm for the game never ended. Charles also loved gardening and was very proud of his sunflowers and flower gardens at his home in Lethbridge. Charles also developed a love of baking in his retirement and could often be found in the kitchen whipping up a cake or batch of cookies. Charles also enjoyed travelling when possible. Waterton, Victoria and Naramata were some of his favorite destinations.

Charles was a long-time member of the McKillop United congregation as well as the North Star #4 Masonic Lodge.

Special thanks go out to those who provided care for Charles when he was no longer able to provide for himself.

In lieu of flowers, any donations to a charity of one’s choice would be greatly appreciated.

One Condolence for “WELLS Charles”