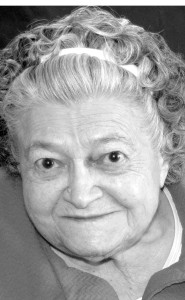 Mary Elizabeth Siljak (Horvath) passed away peacefully in Lethbridge on April 25, 2016 with her family at her side at the age of 89 years. She is survived by her daughter Anne (Rod) Schultz, sons Leonard (Joanne), Mike (Benita), her daughter Janet (Dave) Woodcock, eight grandchildren and eight great- grandchildren. She was predeceased by her husband, John, parents Adam and Katarina Horvath, and sister Ann Megyes. Mary was born February 6, 1927 in Yugoslavia to Adam and Katarina Horvath. She came to Canada in 1929 settling in the Taber area with her parents, sister and many relatives. She met her husband, John, at a dance hall in Taber and they married January 3, 1951. John, Mary and the children moved out to the farm at Kipp, Alberta in 1966, where she resided until her passing. Mary was a very private person who loved to listen to the radio, especially Paul Harvey and later, John Tesh. If John Tesh said it was so, it must be that way. She loved to listen to the news and then discussing current events with her family. Mary had a remarkable memory and could tell you when all of the children, grandchildren and great-grandchildren were born and at what time. She would often say, “Do you remember when?” or “Do you remember this person?” She loved to tell stories about her childhood and the time spent with her sister and her cousins. She enjoyed hearing about her children’s, grandchildren’s and great-grandchildren’s accomplishments and was very proud of all of them. She will be greatly missed. Vigil Rites (prayers) will be held at 7:00PM on Thursday, April 28, 2016 at MARTIN BROTHERS RIVERVIEW CHAPEL, 610 – 4 Street S. Lethbridge, AB. A Funeral Service will be held at 1:00PM on Friday, April 29, 2016 at MARTIN BROTHERS RIVERVIEW CHAPEL, 610 – 4 Street S. Lethbridge, AB, with Deacon Frank Peta, officiating. In lieu of flowers, donations may be made to the HEART AND STROKE FOUNDATION, Box 2211, Lethbridge, AB T1J 4K7.