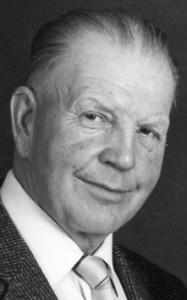 A mighty Diamond Willow has fallen on the bank of the Willow Creek. Son of William Orrin and Emma May (Davison) Hart. Born on a blizzardy day January 18, 1922, up Meadow Creek way. In a few years the Hart family moved down to the flats near Willow Creek. Raymond attended school at Trout Creek, the only boy in his grade with five girls. Ray and his only sibling, Orrin, were greatly impacted by the Depression as children and, to add to the hardship, their family home burned down one chinook day in November, 1932. Dad left school after grade 8, as was common in those hard times, to help out on the farm. Soon along came the war and with its opportunity for the Harts. W.O. and Raymond found extra employment helping to build the new airport for the war effort. Dad was one of the lucky few who not only helped construct S.F.T.S. #15 Claresholm; but, after joining the RCAF as an aero engine mechanic, L.A.C. Hart was posted back to Claresholm. Just a short ride on his Indian 74 motorcycle and sidecar brought him home on leave; helping out on the farm, and fishing and hunting in the hills.

Predeceased by two grandchildren, a son-in-law, Jack Brosz; his brother and sister-in-law, Ray and Lorna Jensen, hunting partner and brother-in-law Norman Kirkwold; and most, if not all, his RCAF friends in Flight 21.

Dad loved Willow Creek; he built up what was arguably the most beautiful farm ever. As a young man during the Depression years he and Orrin trapped and hunted along the creek; they skated on it; swam in it; forded it with cattle and horses, cut burdocks along it; Ray flew to its source, fished from its banks, and irrigated from it. And a few times Dad found his family and farm floating in the middle of it.

No one worked harder to provide for his family than Raymond.

Raymond served as president and secretary of the Rural Electrification Association for a few decades and Dad was the newcomers’ first contact person in the area. They would come to know him as they signed up for power. Thanks to Raymond our area had electricity many years earlier than other farming areas in Alberta. Dad also owned the first Aberdeen Angus cattle herd in the area, even slightly before his more famous cattleman brother, Orrin. Raymond was active in the United Church–on its board and as a trustee. He was one of those dyed-in-the-wool farm cooperative believers who would “drag his ass across a field of broken glass to buy a can of beans at the Co-Op.” He was the longest standing UFA delegate in the province when he stepped down.

Because of his missionary cousin, Ann Davison Storey, Marion and Ray sponsored and supported our Korean wing of the family, the Kims, to Canada where they thrive today, a success story.

Many thanks to his attentive nursing staff at the Willow Creek Continuing Care Centre in Claresholm.

Funeral to take place at the Claresholm United Church Thursday May 5, 2016 at 2:00 P.M. officiated by Reverend Linda Ervin and Reverend Stephan Ulrich.

Donations, in lieu of flowers, in Raymond’s memory can be made to the charity of your choice.