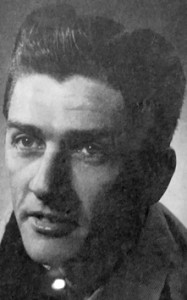 It is with great sadness and quiet relief that we announce the peaceful passing of EARL MILTON DOUCETTE on May 1, 2016. Earl was born June 17, 1921 in New Aberdeen Glace Bay, Nova Scotia. Earl has joined his dear wife Sal, mother Ada, father William Charles, as well as his 10 brothers and sisters.

After a short stint of working in the coalmine, Earl joined the army and was a part of the 13th Field Company Royal Canadian Engineers. He fell madly in love with Italy, Holland, and all of their people. During an end of the war celebration, Earl was discovered as a singer and soon labeled as a “dramatic tenor”. Upon returning home, he attended the school of Julliard, New York where he studied music.

In 1947 Earl and his beautiful Sara (Sal) Walsh had a secret wedding. At this time, female teachers were not allowed to be married and remain teaching. A small ceremony comprised of their priest (who frowned upon that ridiculous rule), his cousin, and his niece, saw Earl and Sal blissfully married.

Earl performed in the Nova Scotia Opera Company, where he sang in operas such as Madam Butterfly, Marriage of Figaro, Lohengrin, and Countess Marissa.

In 1952 they had their first son Paul. A year later they were offered teaching jobs and the family moved to the Blood Reserve, Alberta where they lived for 12 years. Earl and Sara wrote operettas and set up concerts for their students to perform. In 1959 they had their second son John.

In 1966 the family moved to Lethbridge.

Earl is survived by his sons Paul (Jackie)Ladysmith, BC, John (Irene) and his dear granddaughters Angelica (Lyndsay) and Brooklyn, Lethbridge AB who spent countless hours visiting and listening to their grandpa’s stories. But every visit began with “That John – your Dad he can solve any problem, I don’t know what I would do without him”.

No matter where Earl went or who he talked to, he always had a joke or a song. The impression he left on so many different people around the world will live on through his cassette tape programs, cartoons, and stories.

At Earl’s request a private family service will be held at a later date.