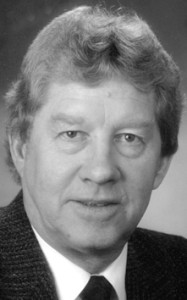 WESLEY WALDEN RICE passed away on Sunday, May 1, 2016 at the age of 91 years, beloved husband of Ruth (Ririe) Rice of Magrath, AB. He was born in Magrath, Alberta, on May 3, 1924, to Walden Jennings and Mildred Lucinda (Clark) Rice. He received his schooling at Spring Coulee and Magrath. He married Ruth Kathleen Ririe on September 28, 1945 in Magrath. They were married for 70 years.

He is survived by his wife, Ruth; and his children, Val (John) Halladay of Medicine Hat, Janice (Johnn) Sterzer of Highland, Utah, Bob (Michelle) Rice of Lethbridge, Cindy (Jim) Irwin of Calgary, Ron (Laura) Rice of Burley, Idaho, and Jackie (Rusty) Rollingson of Magrath; 24 grandchildren and 47 great-grandchildren. He is also survived by brothers Gene (Betty) Rice of Stockton, California, and Gordon Rice of Cut Bank, Montana. He was predeceased by his parents and brother, Russell Rice.

He farmed with his father and brothers west of Magrath near Bradshaw Siding. He later sold life insurance and real estate.

Wes was an avid sportsman. He played basketball with the Magrath Zeniths, the Magrath Rockets, the Edmonton Town Hallers and the Lethbridge Broder’s Chinooks to name a few.

While playing for the Rockets, he scored 55 points in one game, at a time when there was no 3 point line and no “and one”. This established a new provincial record. He was considered a “hustler” and gave his all no matter whether ahead or behind. He took several scoring titles in Alberta and International leagues and was named the Southern Alberta Sportsman of the Year in 1949. He was recently inducted into the Alberta Sports Hall of Fame as a member of the Broder’s Chinooks basketball team who won the Canadian National Championships. He later went on to coach senior men’s basketball including Doug’s Sports and the Alberta Chinooks, who went to the Canadian Championships 6 times. At the time, he was the only person who had played, coached and refereed at the Canadian Championships.

In baseball, he played with teams including the Magrath Eagles, coached by his father, Walden a.k.a. “Bally” Rice, the Lethbridge Nisels, the Seattle Rainiers, and played in the Western Canada and Wheatbelt Leagues. Wes also loved to hunt, fish and collect arrowheads.

Wes and Ruth have 6 children, 24 grandchildren, and 47 great- grandchildren. He loved his family and spent many hours supporting his children and grand-children in sports and other activities.

Wes had many friends and could always be counted on to stop and visit for a while! He loved his grandchildren and never tired of sharing time with them. He will be greatly missed.

The Funeral Service will be held at The Church of Jesus Christ of Latter-day Saints, GARDEN PLACE CHAPEL, in Magrath, Alberta, on Friday, May 6 at 1:00 p.m. Friends may meet the family at the church on Friday from 11:45 to 12:45 p.m. prior to the service. Interment to follow in the Magrath Cemetery.

One Condolence for “RICE Wesley”

Leave a Condolence for Glenn and Charlotte Fletcher