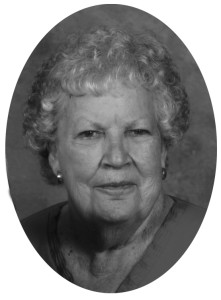 DARLENE STELLA “DENE” (nee KIRK) HUNN, beloved wife of Graham “Gerry” Robert Hunn, passed away at the Chinook Regional Hospital on Tuesday, May 3rd, 2016 at the age of 81 years.

She was predeceased by her daughter, Laurie Ann Hunn-Rogers and her brother, Robert “Bud” Kirk,

Dene was born in Regina, Sask., on September 17, 1934. Her father was a member of the R.C.M.P. and the family resided in various towns in Saskatchewan.

Dene joined the Royal Canadian Air Force on October 6th, 1952 and served with 404 Squadron and the Maritime Air Operational Training Unit, 415 Squadron until her marriage to Gerry Hunn in Summerside, PEI, on May 1, 1954.

During their many postings throughout Canada, the U.S.A., Italy and The Netherlands and as a mother raising five children, Dene was active in supporting their activities in Scouting, Guiding, Camp Fire Girls of America and school organizations.

Dene was active in every parish and her home provided a place of relaxation for many priests, seminarians and F.C.J. Sisters. She was an active CWL member and was President at Calgary Forces Base, Calgary and Honorary President at Canadian Forces, Station Holberg, B.C., military parishes.

As a military wife, Dene was hostess to many Canadian, U.S. and NATO Senior Officers and Commanders and served as the Commonwealth Representative of the USAF Wives Club, Dayton, Ohio as well as the Canadian Delegate of the International Ladies Committee at Allied Forces Central Europe, Brunssum, The Netherlands.

Dene was a most caring person. She nursed her mother-in-law, Evelyn Hunn, following major cancer surgery; she was a Red Cross Nursing Volunteer in the US Air Force Hospital at Wright Patterson Air Force Base, Ohio; and she was a volunteer in the Post-Natal, Day Surgery and Day Procedures Units at the Chinook Regional Hospital in Lethbridge. Dene was a member of the Parish Council and as well continued her ministry to the sick as a member of the Assumption Parish Pastoral Team to the Regional Hospital.

Relatives and friends are invited to a Prayer Service at CORNERSTONE FUNERAL HOME, 2800 Mayor Magrath Drive South, Lethbridge, Alberta, on Monday, May 9th, 2016 at 7:00 P.M. with Deacon Bill Young officiating.

A Funeral Mass will be Celebrated at ST. MARTHA’S CATHOLIC CHURCH, 355 Columbia Blvd. West, Lethbridge, Alberta, on Tuesday, May 10, 2016, at 11:00 A.M. with Reverend Salvadore Ahumada, Celebrant.