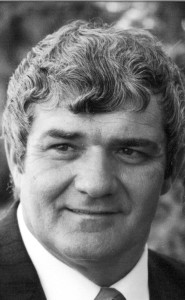 It is with great sorrow that we announce the passing of Willie Golia of Lethbridge, on Monday, April 25, 2016, at the age of 79 years.

Willie was born November 15, 1936 in Lethbridge, AB. Right out of high-school, he worked for Remington Rand, fixing typewriters. He travelled the Monarch, Barons to Vulcan route. He then worked as a milkman for Purity Dairy. Eventually, Willie started with the City of Lethbridge, painting lines on the streets; we always pointed out the crooked ones. He moved on to being the city messenger and finally retired in 1998.

Willie was an avid sports nut. He played baseball and hockey in the late 1950’s and early 60’s for the York Hotel. During that time, he was named Top Goaltender in the city commercial hockey league. He then played for the Lethbridge Longhorns Oldtimers.

Willie was a board member for the Miners Library for many years and was sports coordinator. He organized crib and darts and bowled with his sister Joyce in a weekly bowling league and also participated in the Sutter Golf Classic tournaments from 1985-1993.

Willie will be greatly missed by his daughter Bev (Wes) Miller of Mossleigh, AB; his dog Sandy; brother Michael (Beth) Golia of Lethbridge; brother-in-laws Ken (Doreen) Heaton of Lethbridge and Gord (Esther) Heaton of Seba Beach, AB; sister-in-law Joy Pinney of Penticton, BC; and many cousins, nieces, and nephews.

A Memorial Service will be announced at a later date.

In lieu of flowers, those who wish, memorial donations may be made to Heaven Can Wait Animal Rescue Foundation, Box 6131, High River, AB T1V 1P7, who have taken such wonderful care of Sandy during this difficult time.