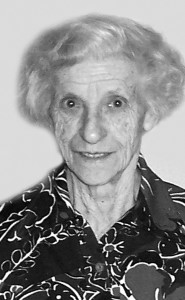 Mrs. Margaret Hewlett of Lethbridge, beloved wife of the late Mr. Les Hewlett, passed away at Good Samaritan’s Park Meadows on Sunday, May 8, 2016 at the age of 95 years. Margaret is survived by one daughter Carol Johnsrude of Lethbridge; one son Leslie Hewlett of Drayton Valley; six grandchildren and 5 great grandchildren.Besides her loving husband Les, Margaret is predeceased by her six sisters and three brothers. Margaret was born and raised in Lethbridge. She served with the RCAF during World War Two and was honorably discharged in November 1945. During her lifetime, she was an active member of the Catholic Woman’s League, Eagles Lodge and the Canadian Italian Club. Vigil Rites will be held at 7:00pm, on Friday, May 13, 2016, at the MARTIN BROTHERS RIVERVIEW CHAPEL, 610 4 Street S., Lethbridge, Alberta. A Funeral Mass will be held at 10:00am, on Saturday, May 14, 2016 at the ST. BASIL’S CATHOLIC CHURCH, 604 13 Street N., Lethbridge, Alberta, with Father Kevin Tumback celebrant. Interment will follow in the Mountain View Cemetery.

One Condolence for “HEWLETT Margaret”