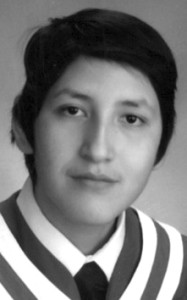 It is with great sadness that we announce the passing of KAISLEY GUY GILBERT RUSSELL-MEDICINE CRANE – PIITA’SOHKOOMAPI (EAGLE BOY) on Friday, May 6, 2916. Proud parents are Fabian Medicine Crane and Theresa Russell. Loving siblings are Calem (Cheyene) Russell, Zane Grey Russell and Santana Rae Russell. He was recently gifted with a nephew/godson, Abel Prince, whom he loved dearly.

Kaisley was known by numerous friends and people as a loving, generous, honest, knowledgeable, caring and kind hearted person. He was known for his humor and quick wit with his friends. Kaisley was a very intuitive individual, striving to research questions he had on topics he wanted to be better informed on. He was the kind of person who took the time to select the right clothing, video games, movies and music. He followed the ways of his grandparents, Camille and Lucy Russell, respecting the Blackfoot way of life, having a close relationship with the Creator and prayed every day.

Virtues of faith and hope enabled him to be the true warrior he was, who battled a very rare cancer for the eleven consecutive months. Upon returning home, he spent a lot of time with his family and friends taking every opportunity to show how thankful he was in overcoming his battle. Kaisley was determined to attend college this fall, as he wanted to take advantage of obtaining an education so he could help others.

Kaisley, being the ever loving and thoughtful son, requested his Gramma Gerri’s assistance to obtain a gift package for his mother which was to be presented on Mother’s Day. He chose the color of the gift right down to the gift bag and card.