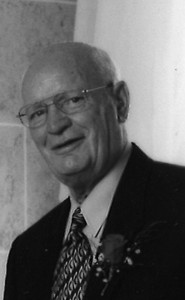 ARTHUR ROBERT MOLINE, beloved husband of Lena Moline, of Lethbridge, AB passed away at the Chinook Regional Hospital, on Friday, May 13, 2016 at the age of 90 years.

Also left to cherish his memory are Lena’s children and their families; Brenda (Robert) Jurgens of Lethbridge and Donald (Shelly) Marshall of High River.

Art was predeceased by his first wife Janet, two sons Ronald and David, parents Lila and Samuel, one sister Thelma and two brothers Howard and Tom.

Art was born September 30, 1925 in Barnwell, AB. After his education Art served in World War II in the army infantry. He then began a lifelong career with C.P.R. as a conductor. He retired after 39 years.

Art enjoyed family time and would often attend his children’s and grandchildren’s various events. He loved to have fun. Art was a member of the Church of Jesus Christ Latter Day Saints.

Art’s first wife and soul mate Janet, passed away in 1995 after 48 years of marriage. He then married Lena in 2000 and enjoyed 16 wonderful years together.

Art will be sadly missed by his family and friends.

In memory of Art, Donations may be made to the charity of one’s choice.