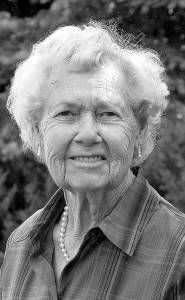 “To everything there is a season and a time to every purpose under the heaven.” Eccl 3:1

Mrs. Janette Van Egmond of Nobleford, beloved wife of the late Casey Van Egmond, passed away peacefully at Good Samaritans West Highlands on Sunday, May 15, 2016 at the age of 92. Janette was born near Monarch on April 13, 1924 to John and Gertrude (Veldhuis) Hofman. She was one of 12 children. She attended both Rose Butte and Nobleford Schools and continued her education at Mount Royal College. She then worked at City Dairy in Lethbridge before marrying the love of her life, Casey Van Egmond. Janette loved knitting, crocheting, sewing and baking. She sewed many articles of clothing for her children. She enjoyed embroidery work which was donated to the annual church auction. She took great pride in her flowers and vegetable garden. Mom also loved to bake. Her children and grandchildren would often receive a tin of fresh baked cookies to take home after a visit. Janette was a long time member of the Monarch Reformed Church and the Dorcas Ladies Aid. Janette is survived by her four sons: Geoffrey (Colleen), Lawrence (Margaret), Jim (Sylvia) and Tim (Lynn), her grandchildren; David, Chris, Jill, Jennifer, Matthew, Bradley, Andrea, Lachlan, Landon and Liam, and several great-grandchildren. She is also survived by her sisters; Hilgonda Harbers, Gertie Stetar, Nellie Plomp and Marjorie Salvucci, her brothers Dick (Eleanor) and Ralph (Leat). Janette was predeceased by her husband Casey, parents John and Gertrude, daughter Marilyn, daughter-in-law Kathy, grandson Lloyd, sisters Rika Warmink, Thelma Nienhuis, Johanna Jansen, brothers John Hofman and Ernest Hofman. Friends and family are invited to pay their respects between 7 p.m. and 8 p.m. on Wednesday, May 18th at MARTIN BROS. RIVERVIEW CHAPEL, 610 4th Street South, Lethbridge. A Funeral Service will be held at 1:30 p.m. on Thursday, May 19, 2016 at the MONARCH REFORMED CHURCH, with Pastor Bob Derrick and Pastor Dan Sandford officiating. Interment to follow in the Monarch-Nobleford Cemetery. Flowers are gratefully declined. Those who wish, memorial donations may be made to the Canadian Alzheimer’s Society, #402, 740 4th Avenue South, Lethbridge, AB. T1J 0N9.

One Condolence for “VAN EGMOND Janette”