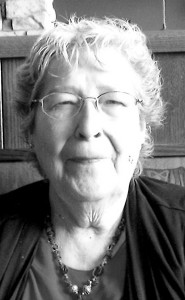 Isabella Smart Titsing, loving wife of the late William Titsing, passed away peacefully on Friday May 20, 2016 at the age of 77 years.

Isabella is survived by her son’s Chad (Annette), Bill (Marcelle) and Cory (Micheal) as well as many friends.

Isabella was preceded in death by her father George, her mother Nora Smart, brothers Martin and George Gerlach and her sister Ethel Laing.

Suzy was a proud grandmother, spending many cherished hours with Kourtney, Brooke and Billy. Whenever the grandkids had breaks in school, they insisted on coming to Lethbridge to be with their grandma.

Suzy was born in Saskatchewan but travelled throughout Canada as an army brat, since her father George Gerlach was a career soldier. She eventually settled in Edmonton, where she was trained as a licensed practical nurse. Suzy worked in many hospitals in Alberta prior to moving to Lethbridge in 1966 where she worked at St. Michaels and the Lethbridge Regional, eventually retiring after 50 years of nursing.

After retiring Suzy was able to spend 100 percent of her time with the love of her life Bill until his passing in July 2014. Suzy and Bill were inseparable and spent time with family and friends every day.

Over the past few months as her health declined, the good Lord saw Suzy getting tired and called her home. She is indeed in peace with her husband Bill.

Suzy appreciated the many professionals she recently had contact with. The staff at Golden Acres, Edith Cavell, the Regional hospital as well as Dr. Yonker coordinated her care exceptionally. Suzy’s family would also like to thank the nursing staff on 4b for their kindness and exceptional care during her most recent hospitalization.