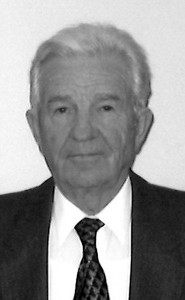 With sadness the family announces that Alex Goertz passed away on May 24, 2016.

He was born on February 18, 1928 to Paulina and Wilhelm Goertz in Josestahl, Ukraine. He had one older brother Johann. He immigrated to Germany in 1943 with his mother and met Elfrida Hass in Herborn, Germany and they were married in 1952. They both immigrated to Canada in 1953 with their extended families.

Alex had taken his bricklayer training in Germany and then continued as a bricklayer in Lethbridge for 35 years. He retired in 1988 and enjoyed working in the yard, doing handyman projects around the home and travelling, especially to Hawaii.

Family & friends are invited to pay their respects 1 hour prior to the Funeral Service.

A Funeral Service will be held at 2:00PM on Saturday, May 28, 2016 at COALDALE LUTHERAN CHURCH, 2006 20 Street, Coaldale, AB. Interment to follow in the Coaldale Community Cemetery.

One Condolence for “GOERTZ Alex”

Leave a Condolence for Jerry & Loretta