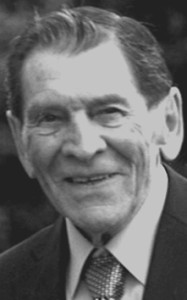 Ron joined the Army in 1957 and spent 6 years in the Signal Corps. He returned to Lethbridge in 1963 and worked for B-Line Transport. In 1964 he became a Firefighter for The City of Lethbridge, retiring in 1990 as Captain.

His spare time was filled by doing odd jobs for others, golfing, curling, gardening and enjoying time spent at the family cabin at Sylvan Lake. He greatly enjoyed the company of family and friends while camping in the 5th-wheel. Ron and Janet enjoyed many winters in Arizona.

The family would like to thank the staff at Edith Cavell Care Centre for their kindness and care of Ron.

A private family graveside service will be held on Saturday, June 4th at 1:00pm at Mountain View Cemetery.

Friends are asked to join the family in the sharing of memories at Grandview Village (20- 3rd Street S.) on Saturday, June 4th from 2-4pm.

In lieu of flowers, please donate to the charity of your choice.