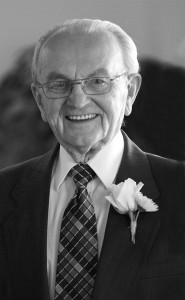 PETER JOHN MARTENS, beloved husband of Helen “Lena” Martens of Coaldale, AB, passed away at the Sunny South Lodge on Tuesday, May 31, 2016, at the age of 103 years.

He was predeceased by his granddaughter, Shannon Pahara, great-grandson Jace Pahara and three brothers, John, Jake and Frank Martens.

Peter was born in Rueckenau, Ukraine to his parents, John and Helena (nee Goetz) Martens, on December 30, 1912. He immigrated to Canada in 1924, living in Hespeler-Vineland, New Dundee, Kitchener and Manitou, Ontario then finally moving to Coaldale in 1929.

Peter and his brother John had several businesses in Coaldale for 21 years. In 1938, he met Helen Friesen and they were married in 1940. Peter and Lena retired to Abbotsford, B.C. in 1968 but he couldn’t slow down; he sold real estate for Block Brothers for the next eight years. Due to his age and Lena’s health, they moved back to Coaldale in 2004.

Music was an enjoyable pastime for Peter throughout his life. He sang in his church choir, led the singing in Sunday School for eight years and conducted a choir that sang over CJOC Radio for eight years. He especially loved his violin.

A Memorial Service will be held at the COALDALE MENNONITE BRETHREN CHURCH, 2114-18 Street, Coaldale, Alberta on Monday, June 6th, 2016 at 1:00 P.M. with Pastor Gary Burke, officiating.

A private family Interment will take place at the Coaldale Cemetery prior to the service.