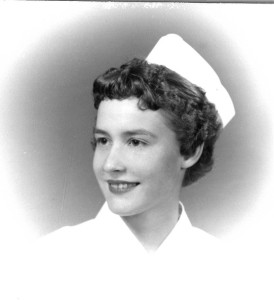 It is with great sadness that we announce the passing of Doreen Marjorie Musk of Lethbridge, after a lengthy period of declining health on Tuesday, May 31, 2016 at the age of 77 years.

Doreen was predeceased by her husband Judge Charles Musk and her twin brother Dale Barton.

Doreen is lovingly remembered by her son Mark (Sarah), her daughter Lynn (David), her son Tom (Tara) and her nine grandchildren. She is also survived by her brother Keith Barton.

Doreen was born in Saskatoon, Saskatchewan and grew up in Prince Albert, Saskatchewan. She spent many happy summers on her uncles’ farms in Senlac and Saskatoon. She met her husband Chad in Prince Albert and after completing her nursing training they moved to Regina. Doreen nursed at the Pasqua Hospital in Regina and following a move to Lethbridge, she worked for many years at St. Michael’s Hospital.

Doreen had many passions in her life. She enjoyed visiting with her many friends, curling, watching baseball and walking her dogs. She enjoyed her friendships at McKillop United Church and had a lifelong interest in art.

Doreen unfortunately suffered from a stroke and had dementia. She lived her final years at St. Therese Villa. The family would like to thank the staff at St. Therese for their wonderful care of Doreen.

A Memorial Service will be held at 11:00am on Monday, June 6, 2016 at the MARTIN BROTHERS RIVERVIEW CHAPEL, 610 4th Street South, Lethbridge, AB. A Private Family interment will be held at a later date in Saskatchewan.