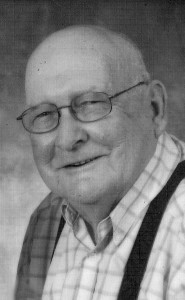 Bill Hamilton, beloved husband, father, grandfather, great grandfather, brother, uncle and friend, passed away June 5, 2016 peacefully in his sleep with his daughter Carla by his side and his family nearby. Bill had just proudly celebrated his 92nd birthday with his family one week earlier. He was predeceased by his loving wife, Caroline (Lonsdale), grandson Shayne Hamilton and his sister Ruby Wood, his son-in-law Charles Prongua, his mother Mabel (Sullivan), and his father Lyman. Bill is survived by his four children and their families: E.L. (Bud) Hamilton (Claire Cadieux), Marv Hamilton (Sherry Hayes), Kathy Prongua and Carla Hastie. He was a cherished grandpa to 10 grandchildren and 7 great grandchildren and uncle to numerous nieces and nephews. He is also survived by brother-in-law Herb Kuehn. Born in Upper Stewiacke, Nova Scotia on a hay, dairy farm with woodland, Bill had just one sister Ruby, two years younger. He was a Boy Scout, member of a Dairy association, 4H member and was an active member in his church. Tragically, by the time he was 16 years old, he had lost both of his parents. Afterwards, Bill graduated from the Agriculture College in Truro. In 1948, Bill heeded the “call of the west” and was Alberta bound where he worked in agriculture for a number of farmers in Southern Alberta, eventually working for brothers Ed and John Lonsdale in Warner. That is where he met their sister Caroline and after a whirlwind romance they were married and had a loving relationship which lasted 60 years. After starting their family in Warner with Bud, they moved to Skiff where Marv, Kathy and Carla were born. Then it was off to the big city of Lethbridge where Bill continued working with agricultural machinery and obtained his Heavy Duty Mechanic license while working for Don Dalke at Southland Ford. Bill retired in 1989 after working with the Dept. of Highways. Bill was involved with the local chapter of the Independent Order of Foresters, eventually becoming the Chief Ranger. He was also a member of the Labor Club. Bill relished the time spent with his family, many pets, camping, curling, dancing, fishing and gardening where he took particular pride in his potatoes and corn. A very kind, generous and passive person, he kept people listening closely with his ‘maritime mumble’. Quick to flash his wonderful smile with his baby blue eyes, he was a true gentleman, and much beloved, especially by his family, whom he cherished dearly. Our family would like to express our deep gratitude for the compassionate care that Bill received from the staff and friends at Martha’s House, St. Therese Villa and finally at the Chinook Regional Hospital, Unit 4C. A Memorial Service in Celebration of Bill’s Life will be held at 2:00 p.m. on Saturday, June 11, 2016 at MCKILLOP UNITED CHURCH, 2329 – 15 Ave. South, Lethbridge. In lieu of flowers, donations may be made to the Heart and Stroke Association, Box 2211, Lethbridge, AB. T1J 4K7 or the Lethbridge & District Humane Society, Box 783, Lethbridge, AB. T1J-3Z6.