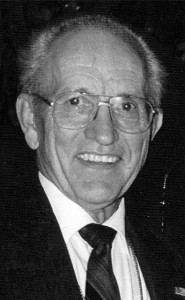 GORDON FAIRBANKS ANDERSON, beloved husband of the late Kathleen of Lethbridge, passed away at the Chinook Regional Hospital on June 9, 2016, at the age of 91 years. Gordon is the loving father of Donald W. (Ruth Ann) Anderson of Coquitlam, Maureen (Tom) Prepchuk of Sherwood Park, Kathryn (Michael) Crane of Lethbridge and Eric (Marni) Anderson of Lethbridge. He is also survived by 20 grandchildren, 54 great grandchildren, and one sister; Moselle Baker. He was predeceased by his wife Kay, wife Margaret and his older brother Byron. Gordon was the second of three children born to LaVern and LeRoy Anderson in Barnwell, Alberta. He was raised in Raymond after which he graduated from the Faculty of Dentistry at the University of Alberta in Edmonton and completed a specialty in children’s dentistry in Boston. He practiced in Saskatchewan, Magrath, Raymond and Lethbridge. Gordon was active in his church throughout his life. He enjoyed Scouting, working with horses and building and flying his small airplane. Funeral Services will be held on Saturday, June 18, 2016 at 11:00 a.m. in The Church of Jesus Christ of Latter-day Saints, FAIRMONT LDS CHAPEL, 205 Fairmont Blvd S. Lethbridge. With Bishop Rod Bennett officiating. Friends may meet with the family from 10:00 to 10:45 a.m. prior to the service at the church. Interment to follow in the Temple Hill Cemetery, Raymond.