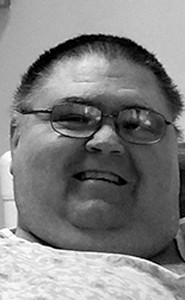 Garth Toone, beloved husband of Rebecca Toone and father of Gillian and Fielding, passed away in Lethbridge on Thursday, June 9, 2016 at the age of 53 years. Garth was born in Lethbridge on June 8,1963, the youngest child of Ed and Dorothy Toone. He grew up in Lethbridge then served a mission for the Church of Jesus Christ of Latter-day Saints in Utah.

After returning from his mission, Garth worked various jobs and attended the University of Lethbridge Fine Arts Program. He was proud to be able to have a travelling art exhibit with the Allied Arts Council in 1996 – “Building Histories – Mines of the Rockies”. Garth continued to cultivate his artistic talents his entire life. Garth spent 9 months “bumming around” Australia in 1992. He toured the gold coast and got his Scuba ticket and spoke often about swimming with the sharks. He met Becky in September 1992 and they hung out a bit before Becky went back to school in Edmonton. They reconnected when she moved back to Lethbridge in September 1993 and spent a lot of time hanging out with mutual friends in the Singles Ward. They joke that they didn’t date that long but they spent so much time together as friends that it just felt right to get engaged. They got married on May 6, 1995, had Gillian on April 30, 1996 and Fielding on March 26, 1999. (“The 2 best decisions we ever made”) Garth loved spending time with Becky and the kids and he was always fun to be around. They will miss laughing so hard with him. Becky went back to work full-time in 2001 as Garth’s health started to deteriorate. Garth continued to work with the disabled until 2010 when he decided it was time to concentrate fully on his health and the kids. For most of Gillian and Fielding’s lives Garth was a stay-at-home dad and they developed a very special relationship with him that many children will never have with their father. Garth’s health was a concern for many years and he was recently in the hospital after a fall for 9 weeks. He had been doing very well and had just started the last stage of his treatment when he unexpectedly and quickly passed away the day after his 53rd birthday. At the time of his death Garth was in great spirits and he and his family were looking forward to his full recovery. Garth will be remembered by family and friends as an amazingly giving and loving person. He had a very strong, unique sense of humour and found joy everyday. He will be greatly missed by his wife, kids, family and friends. Friends may meet with the family on Thursday, June 16, 2016 from 7:00 to 9:00 p.m. at CHRISTENSEN SALMON GENERATIONS FUNERAL HOME, 703-13 Street North, Lethbridge, or prior to the service at the church on Friday, June 17 from 12:00 to 12:45 p.m.

The Funeral Service will be held on Friday, June 17, 2016 at 1:00 p.m. at The Church of Jesus Christ of Latter-day Saints, LETHBRIDGE ALBERTA STAKE CENTRE, 2410-28 Street South, Lethbridge, with Bishop Josh Sherwood officiating. Interment to follow in the Mountain View Cemetery, Lethbridge.