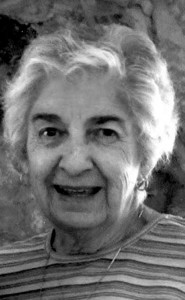 Roberta “MARIE” Hoffman (Moss), August 29, 1935 – June 14, 2016. It is with aching hearts we announce that Marie passed away peacefully in Calgary at the age of 80 years with her loving family at her side, after a brave struggle with cancer.

Marie was born and raised on the family farm in Cross Creek, NB, the eldest child of Robert McArthur Moss and Mary Myrtle (Griffin) Moss. From her parents and life on the farm she gained a lifelong love of nature and gardening. She completed high school in Stanley, and then attended Mount Allison University in Sackville, NB. After completing her practicum as a lab technician at Saint John General Hospital and another two years working in Fredericton, she headed west and found work in the lab at Calgary General Hospital. One memorable evening she ventured out with friends to Penley’s Dance Hall, where she met and fell in love with Hal, her future husband.

In 1959, Marie transferred to Winnipeg General Hospital, and she and Hal were married in Winnipeg on June 25, 1960. The family soon included a son Robert and daughter Susan when Hal & Marie moved in 1964 to Lethbridge. It was there that daughter Judi arrived to complete the family, and Hal & Marie enjoyed living in Lethbridge for almost 52 years. There are many happy memories of camping in the Rockies, and road trips to visit family in Arrowwood, Manitoba, and New Brunswick.

Family meant everything to Marie and she was always there for her family. The door was always open for extended family visits. Marie loved reading, biking, walking, cross-country skiing, gardening, and she played Scrabble to win. Marie was an active participant in her community; as a faithful member of the Lutheran Church of the Good Shepherd for over 50 years, a loyal patron of the Lethbridge Public Library, and after her family was raised, she served 10 years as a homecare worker at the Lethbridge Health Unit. In younger years Marie and Hal were active in the Lethbridge Curling Club, and in retirement they enjoyed many good times hosting and travelling around the world with the Lethbridge Chapter of Friendship Force.

The family sincerely thanks the staff at Southwood Hospice in Calgary and Dr. Oviatt in Lethbridge for their compassionate care, and Pastor Tom Peterson and his wife Karen for their spiritual guidance and support.

Funeral service will be held at 2:00 pm on Saturday, June 18, 2016 at the LUTHERAN CHURCH OF THE GOOD SHEPHERD, 2406 – 11 Avenue South, Lethbridge, AB with lunch to follow. Funeral services to be arranged by Martin Brothers, with Pastor Tom Peterson officiating.

In lieu of flowers, a donation in Marie’s memory can be made to the Canadian Cancer Society, Canadian Lutheran World Relief www.clwr.org or the Lutheran Church of the Good Shepherd in Lethbridge.