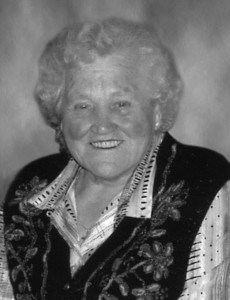 ROSE passed away peacefully at St. Therese Villa in Lethbridge, Alberta on Tuesday, June 14th, 2016 at the age of 95 years.

She was predeceased by her husband Mike (Michal) in 1980, her infant son Mike, parents Frank and Amalia Benci, as well as her younger brother Louis and sister-in-law Mary.

She is survived by her son, Jerry (Ann) of Turin, grandchildren Stephanie (Jon), David (Andrea), Nancy, and Shelley (Derek).  She is also survived by her daughter: Ann (Stan) Varva and family; her brother, Frank (Helen) Benci, as well as numerous nieces and nephews.  Rose also leaves behind her dear friend, MaryAnn Kubik of St. Therese Villa, and godchildren, Shirley Gruending and Gladys Hamilton.

Rose was born in Zavar, Slovakia on March 9th, 1921. She immigrated to Canada with her parents and brothers in 1937 to Tilley, Alberta. The family later moved to Picture Butte where Rose met her husband, Mike while working on a farm in the area. Mike and Rose were married on November 28, 1939. They bought a farm in Turin where she resided with Mike and raised their family. In 1972, Mike and Rosie retired and moved to Lethbridge where she resided in her own home until 2010.

She had a wonderful personality and was full of laughter and joy.  She was a great cook and especially enjoyed making her favorite foods: perogies, cabbage rolls, chow mein and apple strudel. She also loved to play cards, working in her garden and enjoyed watching wrestling on television (farm life stopped for Saturday afternoon wrestling).  Rose was always interested in what was happening on the farm – she always asked if seeding was finished, how the crops were doing, how many calves were born and if harvesting was finished.  She loved her grandchildren, enjoyed spending time with them and always inquired about their well-being.

In February 2010, Rose left her home and moved to St. Theresa Villa where she touched the lives of many people living there including staff. She recently celebrated her 95th birthday in the place she called her home.

A Funeral Service will be held at CORNERSTONE FUNERAL HOME, on Saturday, June 18th, 2016 at 11:00 A.M., with Deacon Frank Peta officiating.