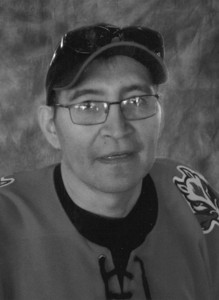 It is with great and profound sadness that we announce the passing of our Son, Father, Husband, Grandfather and Brother, DARCY ALBERT BIG THROAT, “Ninaapiitaohkiitopii” (Eagle Chief Riding), of Lethbridge, at the St. Michael’s Health Centre, Palliative Care Unit, on Sunday, June 12th, 2016 at the age of 55 years.

Darcy was born and raised on the Blood Reserve. He was the first born son to Veronica; but was fortunate to also be a Kipitapoka to his Maternal Grandparents Harry and Clara Big Throat. Growing up as a young boy he spent a lot of time in lower Standoff with all his cousins where they loved to play down by the river and enjoyed everything the outdoors had to offer, such as picking berries, fishing, swimming and exploring.

Darcy received his early education in Fort Macleod. He also attended The Lethbridge Community College Adult Upgrading Program in 1985 where he was the Valedictorian for his class.

Darcy worked for many years in Carpentry in Lethbridge and surrounding areas to support and provide for his growing family. He was employed by Triple E Housing from 1990-1997. He worked for Braman Furniture International, as a foreman from 1997-2007. After his years at Braman he worked alongside his brother Sonny Black Water for Treaty Seven Housing. Darcy worked until he was unable to work any longer. He took much pride in his trade, he was always a very hard worker in all his endeavors.

Darcy was always athletic and will always be known and remembered for his accomplishments in his beloved sport of boxing. He fell in love with his sport at an early age, admiring such athletes like Muhammed Ali. He took it upon himself to be involved in the sport and he trained under the late Sugar Red Crow and The Bullhorn Boxing Club. His love and competitiveness took him many places where he would compete. He travelled to Provinces across Canada and the U.S to compete at such events as the NIAA (Fort Totten, ND – 1988), the Western Canadian Championships in 1986, 1987 & 1988, and also the Provincials in 1987 and 1988. Windspeaker – March 1988 “Darcy Big Throat has numerous peaks in his boxing career Big Throat’s next quest is that of capturing the national championship of Canada at Edmonton’s Convention Center” Some of his accomplishments include; 1985 – Provincial Golden Gloves, Kainai Gloves Best Senior, Best Novice Alberta; 1986 – Western Canadian Champion in 1986 & 1987. His final record was 18-5 without getting KO’d. He used to always say “I was the prettiest fighter” as he never had his nose broke or other boxing injuries. Darcy trained many young boys and girls in his later years.

Darcy was a man of many hobbies such as reading, fishing, golfing, painting, drawing and singing. He always enjoyed attending concerts and collecting his favorite music genres. Darcy loved music and in the early 90s he played in a band called Ruckus, as lead bass guitarist. In Darcy’s later years he shared his love of music with his close friends singing karaoke. A highlight in Darcy’s golfing career was when he got a hole in one on a par 3 in 2003. Darcy also enjoyed playing in the Lethbridge VNEA pool league for numerous years.

Darcy loved and adored his six daughters and in 2003 he was promoted to grandfather. He finally got his boy, Darcy-James. All together he had 13 grandchildren whom all loved and adored their Papa.

Darcy will always be remember as a kind, gentle and silly man. He will be greatly missed by all who loved him.

One Condolence for “BIG THROAT Darcy”