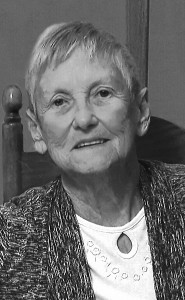 Mrs. Roberta Bagnall, beloved wife of Mr. Donald Bagnall, passed away on Tuesday, June 14, 2016 at the Foothills Hospital in Calgary at the age of 79 years. Roberta Margaret Rossetti was born on March 8, 1937 in Sydney, Nova Scotia to Alphonse and Mary (Kinsella) Rossetti. Besides her loving husband Don; Roberta is survived by her three children Peter Bagnall, Eric (Shelley) Bagnall, and Wendy (Jerry) Luskey. Roberta was the oldest of six children and she is also survived by her sisters Patricia (Don) McKinnon, Flora (Dave) Marchand, Nicki (Bob) Walker and her brother Peter (Cedie) Rossetti, as well as numerous nieces and nephews. Roberta was predeceased by her parents Alphonse and Mary Rossetti, her brother Phillip Rossetti and her nephew Andrew Rossetti. Roberta grew up in Sydney, Nova Scotia where she attended school at St. Josephs and Holy Angels High School. Roberta married the love of her life on November 11, 1960 and became Mrs. Donald Bagnall. Roberta’s greatest joy were her four grandchildren Sara Luskey, Ian Luskey, Hanna Luskey and Darian Bagnall. She was always there to cheer them on and show her love. Roberta provided friends and family beautiful pieces to treasure with her crochet and her knitting. Roberta loved to read and do her puzzles and spend time with her family. Roberta was a beautiful spirit who never judged others, who always had a kind word to say and an extra chair at her table. She was a devoted daughter, sister, wife, aunt, mother and grandmother who will be greatly missed. A Celebration of Roberta’s Life will be held at 2:00pm on Tuesday, June 21, 2016 at the MARTIN BROTHERS RIVERVIEW CHAPEL, 610 4th Street South, Lethbridge, Alberta with Pastor Al Litchfield officiating.