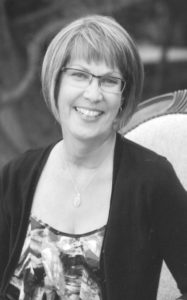 Shirley Kathrine MacMillan (Ulrich) of Coalhurst Alberta; beloved wife of Robert MacMillan; passed away peacefully at home at the age of 58 years on Friday July 1, 2016 after a lengthy illness with cancer. Shirley is survived by her loving husband Robert, her two sons Myles (Courtney) and Kas MacMillan; her father Raymond Ulrich of Bow Island; sister Vivian (Calvin) Sime of Golden, British Columbia; brothers Rod Ulrich of Calgary, Timothy (Tam) Ulrich of Bow Island and Stephen (Trish) Ulrich of Medicine Hat, as well as several nieces and nephews. She was predeceased by her mother Margaret Ulrich; sister Linda Gatz, brother-in-law Larry Gatz and brother Duane Ulrich. Shirley was born in Taber, Alberta on November 4, 1957 and was raised in Bow Island, Alberta. She attended school at St. Michael’s in Bow Island and graduated in 1973. She furthered her schooling at SAIT in Calgary where she completed her Medical Transcription certificate. In high school she developed a love of basketball and continued playing at a college level when she moved to Calgary. While Shirley was working in the health care profession she met Bob and they were married in Lethbridge on December 14, 1984. Shirley was a vital business partner to Bob, and dedicated time in the office making sure that everything ran smoothly. Bob and Shirley’s family grew by one when their first son Myles was born in 1989, and again when their youngest son Kas was born in 1992. Shirley loved camping, woodworking, travelling, and spending time with friends and family. Shirley was a very committed and dedicated mother and became very involved in supporting her children. She was on the parent advisory, school committees, and coaching sport teams. Shirley was a loving wife and mother, a good friend and she lived her life courageously. She will be missed by all her knew her. A Memorial Service will be held at 2:00pm on Thursday, July 7, 2016 at the MARTIN BROTHERS RIVERVIEW CHAPEL, 610 – 4 Street S. LETHBRIDGE, Alberta. Shirley was treated extremely well by all of the medical staff who helped her through her illness. Her wish was for all of her family and friends to donate on her behalf, and expressed how very important your donations would be to all who have been touched by these illnesses. Please, send your donations for Shirley to the Canadian Cancer Society 317 – 10 Street South, Lethbridge, Alberta T1J 9Z9.

One Condolence for “MACMILLAN Shirley”