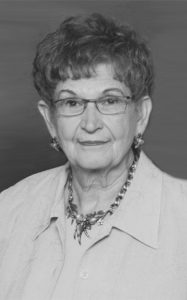 JOLAYNE HUDSON passed away surrounded by family at the Raymond Hospital on Tuesday, July 5, 2016. She was born July 11, 1937 in Raymond, AB to Auburn Tillack and Lucille McBride. She has four siblings: LaWona (Don) Fecho, Bryan (Sharon) Tillack, Bruce (Mary) Tillack and Theresa Ann who passed away at an early age. Throughout her life she lived in Stirling, Raymond, Rosemary, Calgary, Lethbridge and finally back in Raymond. Jolayne met her husband George Arthur Hudson in Raymond. They both ended up moving to Calgary where their courtship blossomed. They were married on August 20, 1956 and would have been celebrating 60 years of marriage this summer. Together they had six children: Dwight, Gordon (Maria), Rory (June), Susan (Glade) Roberts, Sheila (Barry) Robinson, and Sharon (Scott) Graham. From these six children they were blessed with 27 grandchildren and 24 great grandchildren. Jolayne was an active member of The Church of Jesus Christ of Latter-day Saints all of her life. She served in various positions including four missions with her husband Art. Her hands were always being involved in the service of others. Many have received the benefits of a meal brought to them or a baby blanket. Friends may meet the family on Sunday, July 10 from 6:30 to 8:00 p.m. at CHRISTENSEN SALMON GENERATIONS FUNERAL HOME, 703-13 Street North, Lethbridge or prior to the service on Monday at the church from 12:00 noon to 12:45 p.m. The Funeral Service will be held on Monday, July 11, 2016 at 1:00 p.m. at The Church of Jesus Christ of Latter-day Saints, TAYLOR STREET CHAPEL, along 4 Street West and 2 Street North, Raymond. Interment to follow in the Temple Hill Cemetery, Raymond.

One Condolence for “HUDSON Jolayne”