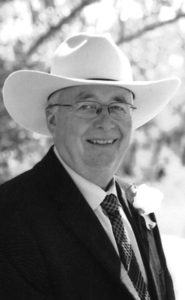 KEITH BRIAN LYON, beloved husband of Evelyn Lyon, of Lethbridge, passed away on July 6, 2016 at the age of 61 years. He is also survived by his son, David (Jill) Lyon and his daughter, Sarah (Justin) Eliot as well as his 2 brothers, Bruce and Glen and his sister Mary. He was pre-deceased by his parents Gordon and Gwen Lyon.

Keith grew up in Nanton and graduated from the University of Alberta in 1979 with a B.Sc in Agriculture. Keith worked at a variety of roles in the agriculture sector travelling much of Southern Alberta making friends along the way.

His biggest passion in life was his ranch west of Nanton, where he spent virtually every weekend with his family and his beloved dogs. He was a hunter, motorcycle enthusiast and a jack of all trades. Whether it was fixing equipment, building his first home or wiring the quonset; he was fearless and would take on any challenge and complete it to the best of his ability. He took great pride in working with his own hands and seeing the fruits of his labor.

His children were the light of his life and he took great pride in seeing them grow and succeed in their own lives. He had many great experiences that he held dear, such as walking his daughter down the aisle, travelling with his wife and family, and countless motorcycle trips with his son.

He will be missed greatly by his family.

A Celebration of his Life will be held at THE FAMILY RANCH, located on the corner of TWP 154 and RR 285 South-West of Nanton (Further directions can be found on the Cornerstone guest book page), on Saturday, July 9th at 11:00 A.M. with a reception to follow at the CHRIST CHURCH NANTON, 2306-20th Street (1 block west of the Candy Shop), Nanton, AB. Please dress comfortably for an outdoor celebration.