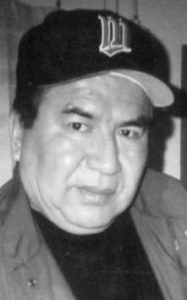 It is with great sadness that we announce the sudden passing of our father, grandfather, great-grandfather, brother, uncle and nephew, MARTIN LEWIS SCOUT “Saya’kapaissapiyi” (Looking out of the water), beloved husband of Alma Spear Chief Scout, who passed away on the Blood Reserve on July 4, 2016 at the age of 71 years. He was born on January 4, 1945 at home on the North end of the Blood Reserve to the late Ben and Sarah (Stabsdown-Blue Wings) Scout.

Martin met and later married the love of his life, Alma Spear Chief, on June 23, 1967. They lived on the Blood Reserve, later moved to Calgary, Lethbridge and Saskatchewan where Alma pursued her education as an R.N. During this time, they raised their children and later moved back to their homestead at the Fish Creek area where he farmed and ranched until his passing.

Martin was employed at various places such as the Lethbridge Friendship Centre as an outreach worker, SRI Housing, Atco Gas, Shell Plant, Waterton Dam and various construction sites, including roofing, throughout Calgary South during his lifetime.