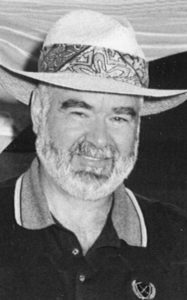 ERIC JACOB BAKER, of Lethbridge, AB, beloved husband of Patricia Joan Baker, passed away after a heroic battle with cancer on Sunday, July 3, 2016, at the age of 71 years. Eric was born in North Sydney, NS. He moved with his family to Regina, SK, where he met and then married his beloved wife, Patricia, on January 16, 1965. He was a businessman and entrepreneur with a million and one ideas and a head for numbers. He was a member of various Rotary clubs and Mensa. In his earlier years, Eric loved playing baseball, football, curling and golf. He developed a special passion for golf which he continued to play well into his later years and was an active member of the Lethbridge Golf and Country Club. Eric loved travelling the world around, especially to tropical destinations. No one could sport a panama hat better than our big kahuna! He was an avid writer and reader and could often be found with at least one book in hand in a favorite chair at home or under a palm tree in some far-away paradise. Most importantly, Eric was an extraordinary husband, daddums, grandpa, son, brother and friend. All of his family and friends were more than fortunate to have had such a fun, loving, supportive and generous man in their lives, especially his grandson, Ethan, who was the light of his life. Despite heroic battles with many hardships and illnesses over the years, cancer ended up taking away our beloved big guy far before we were ready to let him go. We can’t wait to see him again when we face our own times to go as we know he will be waiting for us with open arms and a big smile on that beautiful, bearded face. In the meantime, we will miss him tremendously and cherish him always. In keeping with Eric’s wishes, there will be no service.