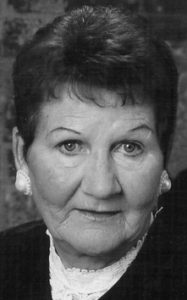 Mrs. Betty Marie Jordan (nee Hendricks) of Cowley, AB passed away early Wednesday morning at the Pincher Creek Hospital at the age of 77.

Betty was born and raised in Weldon, SK, graduating from high school in 1957. She retired in September 1998 after working at Alberta Mental Health for 25 1/2 years. Betty and Vern moved from Lethbridge to Cowley in 2011 to be closer to the CWR Boat Club where they spent all of their summers. They also spent many years wintering in Yuma. Betty and Vern travelled to many exotic places and some not so exotic places. They lived an exciting and adventurous life. Their children never knew which country or province they might be in or if they were at sea level or lost somewhere on a logging road at the top of a mountain. She will be greatly missed and fondly remembered by so many.

At Betty’s request no funeral services will be held.