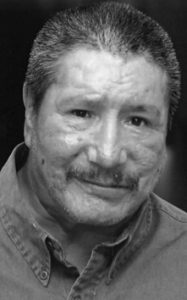 It is with heartfelt sadness that the family of Thomas Little Plume announce his passing on Tuesday, July 5, 2016 at St. Michael’s Palliative Care Centre in Lethbridge.

A prayer service will be held on Sunday, July 10, at 12:00 noon at the Snodgrass Funeral Home in Pincher Creek, followed by a one-day wake at the home of Muriel North Peigan (1325 – 12 Avenue SW, Brocket).

A Funeral Mass will take place on Monday, July 11, 2016 at 11:00 am at St. Paul’s Catholic Church. The interment to take place at the Brocket Cemetery, followed up a reception at the Piikani Community Hall.