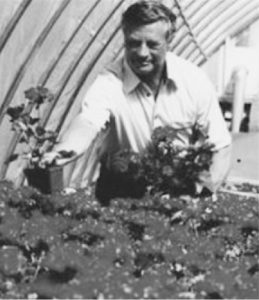 STANISLAW KRAWCZYK, of Lethbridge, also known as Mr. Greenthumb, passed away at the Chinook Regional Hospital on Thursday, July 7, 2016 at the age of 81 years.

Stanley is survived by his sister Mary of Poland. He was predeceased by his parents Aleksandra and Wladyslaw Krawczyk, his sister Irene, and brother Anthony.

Stan was born January 5, 1935 in Metelno, Poland. Stanley was a horticulturalist by trade, attending the University of Gdansk, Poland. He moved to Canada in June 1972 with his family: his wife Irena, daughter Anne Hale, and son Peter. Shortly after arriving, Stan began working with Sick’s Lethbridge Brewery. Eventually he was promoted to the head gardener position, where he oversaw the Brewery Hill Tourist Attraction at its peak. He also took care of the Edmonton Brewery for Molson’s for many years. He was involved in the local community through the Horticultural Club and travelled to towns in Southern Alberta, educating people on proper gardening practices. For his horticultural service in Southern Alberta, he received a lifetime honorary membership in the Alberta Horticultural Society. He also co-hosted a radio show, during which time the Mr. Greenthumb name was coined for him. In 1990, he opened up his own greenhouses and worked there until retirement. Stanley loved to go fishing, picking mushrooms, and spending time with his German shepherds. In the latter years, he spent many days camping and picking mushrooms with his only granddaughter Aleksandra, all the while whittling away, making canes for all his friends and acquaintances.

Stan’s smile will be sadly missed by his family and friends.