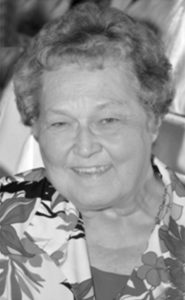 MRS. AUDREY MAY COVERT, of Raymond, Alberta, beloved wife of Earle L. Covert, went to be with her Lord and Saviour July 12, 2016, at the Raymond General Hospital at the age of 78.

Audrey was born October 20, 1937, in Hoyt, New Brunswick. She was the daughter of Edith Letitia Kirkpatrick and Cedric Duncan Kirkpatrick. She said she was a double Kirkpatrick. The day after graduating from Saint John Vocation School, her family all moved to Ottawa. There she met her husband Earle Leslie Covert whom she married August 27, 1960. She lived in Kingston, Ontario until Earle graduated in medicine from Queen’s University and then interned for a year.

Audrey moved with Earle and their son Lawrence Leslie Covert to Hay River, Northwest Territories where they were involved in the Pentecostal Sub-Arctic Mission and the H. H. Williams Memorial Hospital. Her daughter Cynthia “Cindy” Gayle Covert was born in Edmonton.

In 1997, when Earle left the Hay River medical practice, she moved to Calgary for two years before they moved to Raymond, Alberta. Audrey was a stay-at-home mom. She was actively involved in the Hay River Pentecostal Chapel where she played the piano or organ for over 30 years. Before the Hospital had a Lab Technician, she cross-matched blood. Audrey organized and chaired the Woodland Manor (a Senior Citizen Care Home) Board until she left Hay River. She has been involved with the 50+ Group at Victory Church in Lethbridge. Since March 2015, Audrey has been in the Good Samaritan’s Garden Vista in Magrath, Alberta.

A Celebration of Audrey’s Life will be held at the VICTORY CHURCH, 1 Mile East of Lethbridge on Hwy # 3, on Saturday, July 16, 2016 at 3:30 P.M. with Pastors Ralph Molyneux and Kelly Stickel officiating. A reception will follow afterwards at Victory Church. Audrey asked to encourage everyone to be happy at Her graduation to Glory.

In lieu of flowers, Audrey requested you consider making a donation for Bibles to the Gideons International in Canada, of which she was a member. The Gideons contact is John Reghier 403-328-7145. There will be a Gideons’ table to accept donations at the Memorial Service.

The family would like to thank Dr. Eric Baker, Dr. Regan Steed and the other Physicians at the Raymond Clinic, Dr V. Luykenaar and the other Physicians at the Campbell Clinic in Coaldale, Dr. M. Wong, Dr. A. Low, Dr. D. Sommerfeldt, Dr. E. Janzen, Dr. Arbillaga, Dr. Storey, the Staff of the Raymond General Hospital, the Lethbridge Regional Hospital 4B and ICU Staff, the Good Samaritan Society Prairie Ridge, Raymond, Alberta and the Staff (too numerous to name) who all gave her excellent care towards the end of Her life. Thanks also to her table mates at the Good Samaritan Society Garden Vista in Magrath, Alberta.