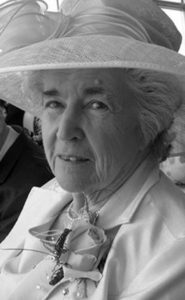 It is with heavy hearts that the children of Lyla Vivian Mitchell announce her passing. She passed peacefully in her home at Vista Village in Pincher Creek on Sunday July 17th. She was surrounded by three generations of loving family and with her lifelong sweetheart Jim at her bedside holding her hand. She was born in the midst of the Porcupine Hills of Southern Alberta as a late Christmas gift to her family on December 27, 1931. She was raised in the Cowley area and attended school at the rural Tanner School until moving to the metropolis of Pincher Creek for high school. She later attended secretarial college at Mount Royal College in Calgary. Somewhere in between there Lyla, who famously loved to sing and dance, met a handsome young man at a dance in Waterton. They quickly became sweethearts, then newlyweds and have been inseparable for 63 plus years. His work on seismic crews led to many adventures for them chasing the work around Alberta, and their first two children were born on the road. Eventually they settled back in Pincher Creek where they would remain to this day. She worked as a secretary, first at Matthew Halton High School, then for the Town of Pincher Creek. Throughout her life and especially after retirement, she babysat for other families which for her was always much more of a joy than a job. She was a devoted member of the Pincher Creek United Church, singing in the choir for many years and acting as secretary for a time. She was a member of the Red Hat Ladies and the Rebekahs Lodge. She was passionate about several causes especially the Canadian Mental Health Association. Lyla was predeceased by her loving parents Albert and Mary, as well as her sister Marjorie Richards and her brothers Ralph, Ray, and Walter. Lyla will be lovingly remembered by her husband Jim Mitchell, her sister Verna (Cliff), her children Ken, Chuck (Monica), Frances [formerly Lorraine] (Dieuwertje), Carol (Hugh), Brent and Ian (Katy). She is also survived by grandchildren Kate (Chad), Tess (Ross), Sadie, Thomas, Tina (Chris), Rochelle (Steve), Shaen (Eric), and great grandchildren Jordan, Jace, and Megan. The Mitchell family would like to extend the most emphatic gratitude possible to all the staff of Vista Village. Not only for the family like level of care they have provided to Mom and Dad over the years, but also for the grace and kindness they showed us as we spent our last hours with Mom. There truly are no words we can offer to fully express what that means to us all. Thank you. A Funeral Service will be held at the Pincher Creek United Church (972 Police Avenue) on Friday, July 22nd at 2:00 PM. Memorial Donations in Lyla’s name may be made directly to Alzheimer’s Society of Alberta (402, 740 4th Avenue South, Lethbridge, Alberta T1J 0N9) or to the Canadian Mental Health Association (426 6th Street South, Lethbridge, Alberta T1J 2C9).