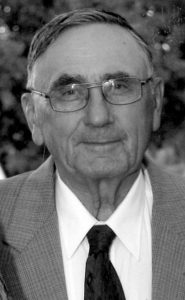 Gordon Schmitt of Milk River, passed away at the age of 85 at the Edith Cavell Care Centre in Lethbridge, after a lengthy illness He fought a long battle with Diabetes and Parkinsons Disease. Left to mourn his passing are his daughter Winona (Lance) Doram of Longview, AB, three grandsons Jaxon, Jagger and Jace Doram. and son Richard Schmitt of Vancouver BC. his brother Ray(Jean) Schmitt, his sisters Maxine(Ken) Cleveland and Phyllis Schmitt (Lynn Oberle). as well as eight nieces and nephews and many good friends. He was predeceased by his loving wife Jean (Johnson) of 50 years, and his parents, Hank and Emma Schmitt of Milk River. Gordon graduated from the Masinasin High School and went on to Calgary Tech to take courses in Agricultural Mechanics and Welding to prepare him for his future in farming. Gordon began farming with his father and brother in 1951. He lived all of his life in the Masinasin district and the town of Milk River. Gordon was active in his community and served in many organizations. He was a 50-year member of the Masonic Lodge and served as secretary for many years He was an active member of St. Paul’s United Church in Milk River and served on its board for many years. In his younger years, he loved playing baseball and basketball. In high school he had the reputation for always winning the half mile race at various track meets. He was also an active member of the Milk River Curling club and the Milk River Golf Club for many Years. Gordon had a strong sense of loyalty to his family and was very proud of his three grandsons. Thank you to the people of Edith Cavell Care Centre for the kindness and compassion shown to him in his last days. A family graveside service will be held at the Milk River Cemetery on July 27th at 11:00 am. A Memorial Service will be held at 2:00pm at ST. PETER’S ROMAN CATHOLIC CHURCH in Milk River, with Rev. Marion Martin, officiating. In lieu of flowers, donations may be made to the Canadian Diabetes Association, (204-2323-32 Ave. NE, Calgary, AB. T2E 6Z3) or the organization of your choice.

One Condolence for “SCHMITT, Gordon”